You can order the catalogue for the special exhibition "Our Courage" in English here at the price of 29.90 euros plus 2.50 euros postage and shipping by e-mail!

From Białystok via Frankfurt to Amsterdam, from Berlin via Budapest to Bari: The
exhibition “Our Courage” is the first project of its kind to present the diversity of Jewish experience in the early post-war period from a pan-European, transnational perspective. The exhibition was conceived at the Jewish Museum Frankfurt and can be seen as a second station at the Documentation Centre.

The Destruction of Jewish Europe

Before the Shoah, Europe was the most important continent for Jewish life, and the
beginning of the exhibition calls this to mind. By 1945, continental Jewish culture had been irrevocably destroyed. For many survivors, the end of the war meant continued flight and migration. Some tried to return to their Eastern European homeland and found not surviving relatives there, but hostile neighbours who had helped themselves to their belongings. Many fled further west to the Displaced Persons Camps of the US military. For the most part, their
goal was to make their way to British Mandatory Palestine or the US.

In the period immediately following the war, the situation Jews found themselves in
varied widely. It depended not only on where and how they’d survived World War II, or which unit or partisan group they’d fought in, or where they had fled to. It was also crucial how many relatives and friends were still alive, whom they happened to encounter, and what help they received. The location they tried to settle in temporarily or permanently also played a key role.

The exhibition conveys this range of different circumstances survivors lived in between Eastern and Western Europe; its title recalls a Yiddish partisan song from 1943 as well as the name of the newspaper of the DP camp in Zeilsheim near Frankfurt. The exhibition space features seven installations portraying cities and counties in Europe.

Frankfurt am Main or (East) Berlin can be found alongside cities lesser known here, such
as Białystok in Poland, where more than half of the population was Jewish before World War II, the transit city of Bari in southern Italy, and the region around the Lower Silesian municipality of Dzierżoniów, which became a focus of Jewish ​​hope in Poland for a few years following 1945. Films, photographs, portraits, and personal objects convey a sensual impression of these locations, while autobiographical texts, read by actors of the Schauspiel Frankfurt ensemble, bring to life Jewish perspectives in these places shortly after surviving the war.

Europe as a Place of Escape

From this period of flight across Europe, various material testimonies from these
locations have been preserved in private and public collections. They speak of the search for relatives, the existential misery of the survivors and refugees, the first attempts at documenting and commemorating the mass extermination, as well as efforts to reconnect with pre-war culture and to revive Jewish traditions. And they tell of people’s efforts to leave the continent of Europe behind. Together, these testimonies confirm that Jewish survivors and refugees were not passive victims, but took their lives into their own hands and had an active part in shaping them. 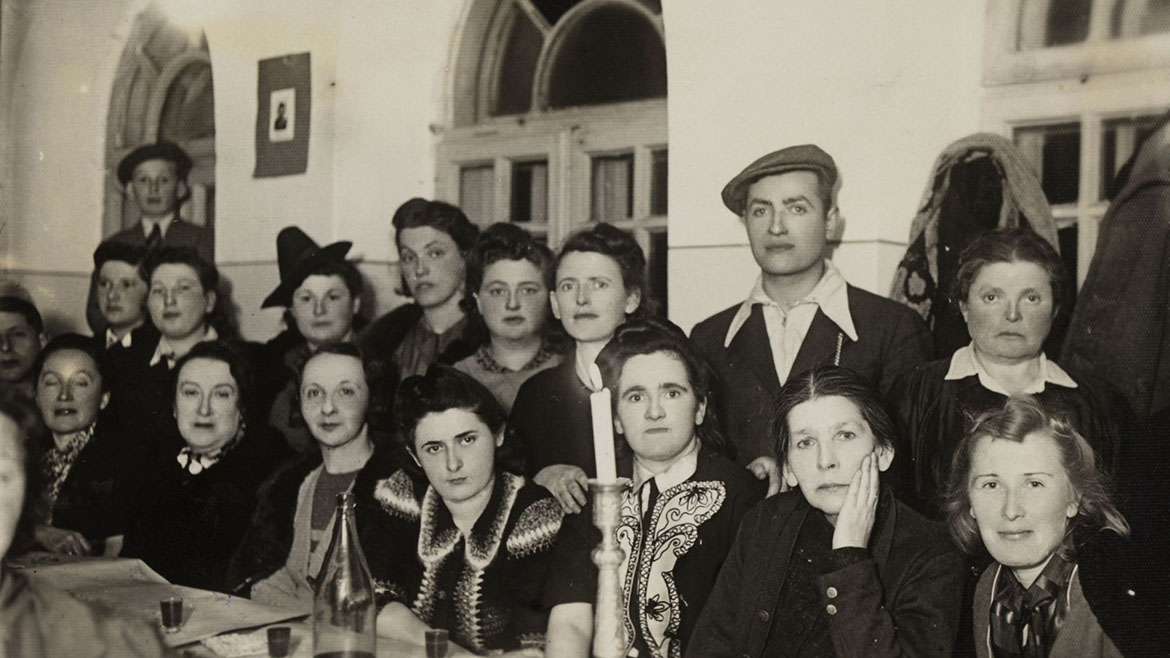 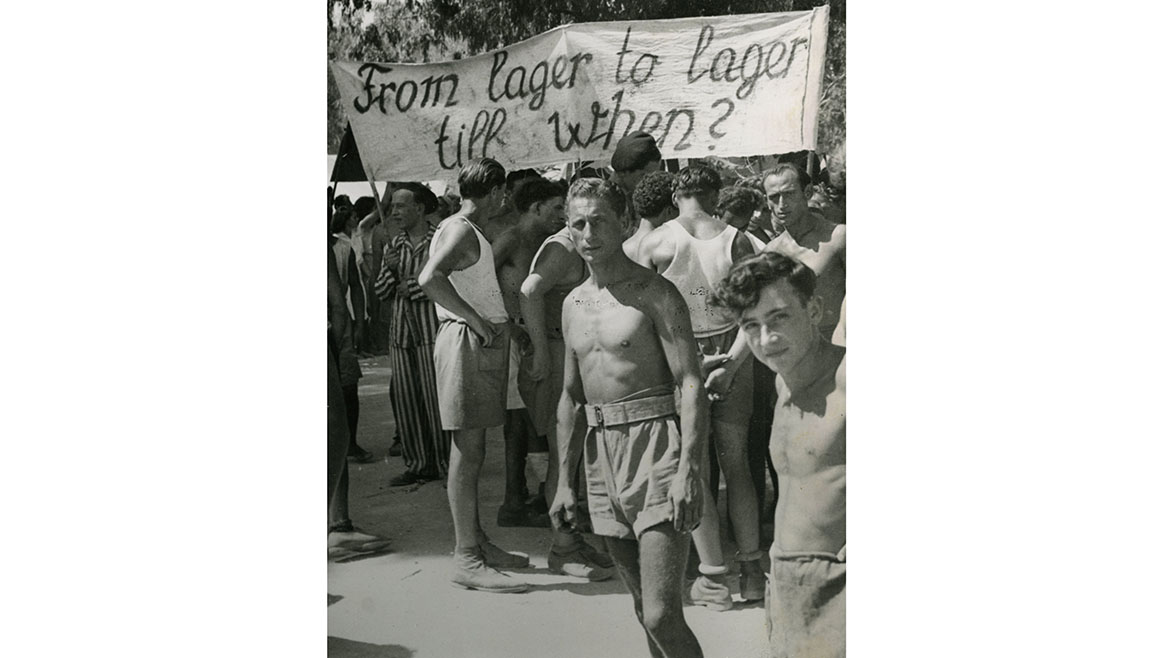 Demonstration at the Poppendorf DP camp after Jewish DPs who wanted to go to Palestine were refused entry by the British authorities, 1947 © Mémorial de la Shoah, Paris. 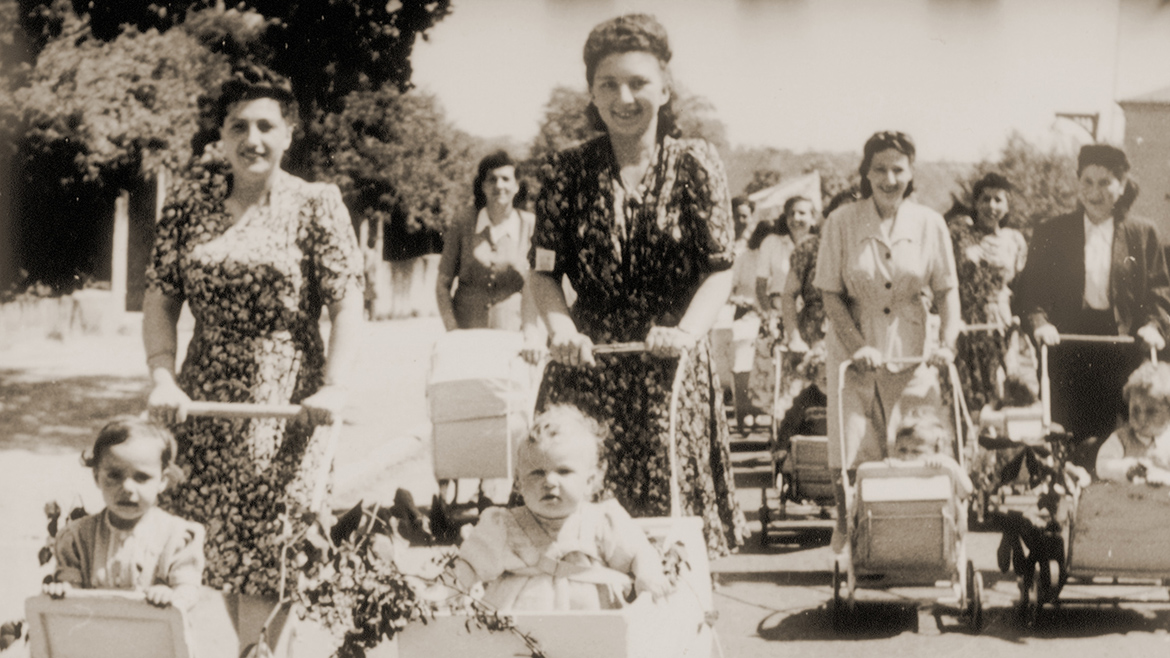 Art and the Public

The years immediately following the war saw a noticeable number of graphic works and
artist books on the Shoah being published. Together with their number, the choice of these forms of publication, which by their very nature are aimed at a broader public, shows that the artists wanted to bear witness to a wider audience and contribute to the social discourse on the genocide of European Jews.

The numerous temporary theater ensembles, especially in the Displaced Persons Camps in the American-occupied zones, were for the most part aimed at the refugee community
itself. They sought to find images, sounds, language, and emotions for what had occurred. In addition, they addressed the present reality in the transit camps and shaped and discussed initial ideas for the future. The language used in these theatrical performances, like that of literature, was Yiddish. As a cultural expression and linguistic means of communication, it had become the only remaining homeland, which is also evidenced by the brisk pace of Yiddish
publication in Germany’s American sector, with more than one hundred different magazines and around thirty volumes of prose and poetry documented in the years following 1945.

The exhibition narrates up to the year 1948 and presents an opportunity for reflection on the new international order. In many respects, 1948 was a turning point in the post-war period as Europe became the playing field of the Cold War. The British mandate over Palestine ended in May. Resting on the decision of the newly established UN General Assembly to divide the region, David Ben-Gurion, Israel’s first prime minister, declared part of it to be the new independent State of Israel. In the years that followed, almost 400,000 Jewish refugees from Europe were admitted into the country. In December 1948, the UN General Assembly adopted the principles of a new, international definition of law: the Convention on the Prevention and Punishment of the Crime of Genocide and the Universal Declaration of Human Rights. Both were largely prepared by Jewish immigrants from Europe and drew lessons from the mass murder of European Jews.